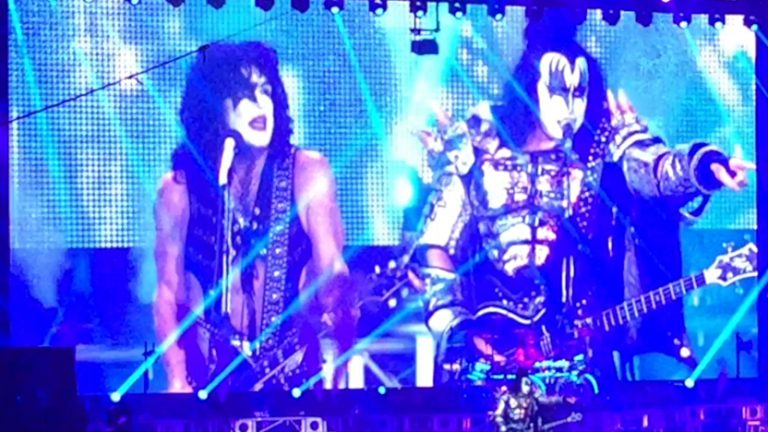 I Got KISSed Last Night

Wow! What a show. I never before saw this band live or purchased any of their albums back in the day, but it sure was an incredible concert. Their Hall Of Fame music was accompanied by some really cool laser affects, stage presentations and of course the famous KISS look!

They opened with ‘Detroit Rock City’ and closed with ‘Rock And Roll All Night’. And a lot of jamming songs in between. The original members, Gene Simmons and Paul Stanley, are in their mid 60’s now but still possess and give off a ton of energy.

I learned something that really struck me as ‘I Like These Guys’ at the show.  KISS is a big supporter of our military and our veterans. They’ve partnered with Hiring Our Heroes to salute military heroes across our country. During the show, they donated $150,000 to a group that helps veterans! At one point during the concert the music stopped and the entire stadium stood up, placed their right hand over their heart and followed Paul Stanley as he took the lead in reciting the ‘Pledge Of Allegiance’.

Remember I mentioned that KISS closed with ‘Rock And Roll All Night’? The song was actually introduced with a version of ‘Star Spangled Banner’! I caught some of it on video!