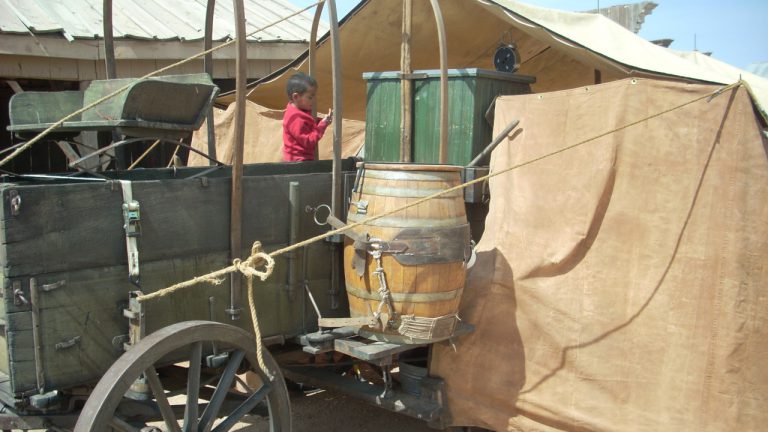 This wagon doesn’t represent someone hauling around a bunch of stuff. This chuck wagon represents a great memory. This chuck wagon belongs to the cook who conjured up a meal for a hundred plus people. The entrees were prepared in Dutch ovens heated from coals laid out in small pits on the ground. This wagon belongs to the new friend I made at a wedding my daughter and I attended. I’ll refer to my new friend as Ole Joe.

My daughter and I were privileged enough to be invited to our friends wedding that took place in New Mexico. The actual location of the wedding, which is where this picture was taken, was an old western town setting which has been used in many cowboy movies. Portions of ‘Cowboys & Aliens’ was filmed here. No one actually lives in this town. However, it has the standard western look with the dirt road boarded with bars, a jail house, a hotel, a stable and more. This was a very unique wedding which generated many great memories!

Back to Ole Joe. Ole Joe is quite the character. I got to talking with Ole Joe while he was still preparing the feast. He let me enter his domain and try some of the dishes while he was still working his magic. Ole Joe then started showing me his chuck wagon and how he had everything organized and setup for making and carrying what he needed to prepare his meals. Ole Joe then showed me a small, almost hidden, drawer in his chuck wagon that held two small jars, and asked if I would like to try a sip.

Of course I do!

The first jar contained a clear liquid that Ole Joe said one could probably run their tractor with. We both took a sip, and I would tend to agree with the tractor comment … good stuff though! We followed that up with a taste from the second jar. This one had a little color to it. It wasn’t quite as strong, so we each had a second taste…once again good stuff. I felt honored that Ole Joe would let me into his life and share a few tastes of his special drinks with me. Later, as I went through the food line, Ole Joe filled my plate high with a meal fit for a king.

Ole Joe didn’t have any miniature chuck wagons for sale. He didn’t have any Dutch ovens, like the ones used to prepare the meal, available for the guests to purchase. Ole Joe was a part of the whole wedding experience that remains with me without the need of a gadget. I have this digital image I can pull up anytime. But if I should lose this image, that’s OK too, I’ll always have the memory.

This is a great memory!