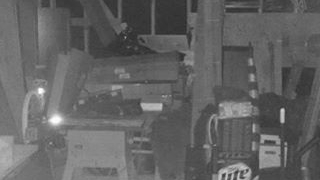 I spent the majority of the day with one of my brothers, code named Brett. Brett is a huge Denver Bronco fan. With that said, we did a Denver Bronco tour.

The tour started with the new additions to the Bronco’s training facility. I don’t believe it’s scheduled to be completed for this coming season, but the next. This is so amazing. The Bronco’s will have a full indoor practice facility. The outdoor practice area is also being renovated to allow more than double the number of spectators during training camp. Gotta love it!

Since Brett has the inside scoop, we then went to visit Peyton Manning’s home in Denver. The entry code we had was incorrect, so we were forced to admire from outside the walled dwelling. While we were scouting around the area, we observed this unique piece of art work at a nearby park.

Later that evening, 10:00 PM, I was off to pick up one of my friends at the Colorado Springs airport. Code named Mike.

A garage was a good choice for this evening to spend the night. We had a lot of rain today and it looks like more in the forecast through the night. As the photo shows, this is not a minimalist garage. However, I was able to lay out in the front part by the entry door. It sure gets dark in there when the door is closed. I slept great. I think I was tired from the night before in the car.

I learned today that if you want to be happy, you can be happy. It doesn’t take that much. I also learned that ambient stress and unhappiness can be powerful contributors to one’s psyche. It’s best to stay away from those contributions.